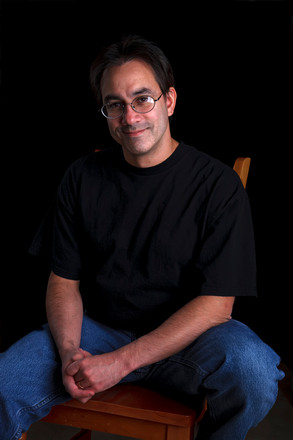 With over 25 years of professional experience, Steve Garcia has lent his talents to some of the biggest and most respected companies in the entertainment industry, including but not limited to Warner Brothers, Disney, Universal Entertainment, Sony Pictures, Turner Pictures and Marvel Entertainment.

Growing up on a healthy diet of comics, fantasy illustration and animation fueled his passion to pursue a career in those very fields.

After acquiring his degree in Fine Arts at the Rocky Mountain College of Art and Design in Denver Colorado, he moved to California to study Animation at the California Institute of the Arts in Valencia California (CAL-ARTS). Right out of college, he was taken as an animator for Turner Pictures and later for Warner Brothers Feature Films. He animated for such critically acclaimed films as "Iron Giant," and "Cats Don't Dance."

Priding himself in his versatility, his animation and illustration experience led to the opportunity to work in Development and Pre-visualization on several Warner Brother film projects, as well as numerous television properties, such as "The Simpsons," "Mission Hill," "Ozzie and Drix," and "X-men: Evolution", as well as Klasky-Csupo's "Rugrats go to Paris" Feature. Contributing experimental animation, storyboards, character design, timing, and key layouts.

Two of his most enjoyable game projects were a "Lord of the Rings" project and Disney's "Epic Mickey."
Ironically, Tolkien Fantasy and Disney Animation were the two very things that were intricate in the forming of his passion for art as a child.

He has also contributed illustration work to the Wizard of the Coast's Magazine line since 1990 as well as illustration work for four books. The most recent being "The Art of Epic Mickey" book. (Publisher: Disney Editions (October 11, 2011).

Steves most recent game work was done for E.A. Studios. Where he contributed concept art for EA mobiles "Monopoly Bingo" as well as concept art and storyboards for many projects in development, including a "Plant's vs Zombies" game and Pitch art for a runner based game for Marvel Ent.

He also has contributed pre-production and production concept art for E.A. Mobiles "Minions Paradise", as well as animation for E.A's very successful mobile game "The Simpsons Tapped Out".

He now lives and plays in Texas with his beautiful family and houseful of critters.